Felt paper vs. synthetic underlayment for your roof

In our industry, there are two main varieties of underlayment: felt paper and synthetic. Felt paper, also referred to as tar paper, was the standard underlayment material in roofing for decades. It was easy to use, durable, and even had alignment lines to help with the shingle installation.

So which one is best? It depends on who you ask. So let’s take a closer look at the differences between these two materials.

Just like hot dogs at a baseball game, people like what they know. And many roofers still use felt paper because it was the material they grew up using and working with. And it’s still a viable product because it is cheaper than synthetic underlayment and provides better traction during installation, especially on steep pitch roofs.

And it still does the job. Although it was primarily used in a way to protect the home until shingles could be installed during lengthy installation. It took a lot longer to replace a roof 50 years ago. In many cases, the felt was left on when the shingles were installed and it eventually became standard practice.

Finally, felt paper is cheaper. When building a home, the cost of every material should be taken into account. Depending on the size of the roof, the difference in cost could be significant. If it works as well as synthetic, why not use those savings on other areas of the house?

This paper is a new and, in some aspects, improved material for roofing underlayment. It’s thinner, lighter, and a single roll can cover much more area than a similarly sized roll of felt. And even though it is thinner, it is just as strong as felt and less resistant to ripping. Synthetic also alleviates some of the weight on the roof because it is so much lighter.

For the most part, though, felt paper and its synthetic counterpart both do a great job of weatherproofing the decking before shingles can be applied. Applications are similar for both materials and both stand up to the elements. Synthetic underlayments are usually cap nailed if it’s left exposed for a period of time. During those times when specific requirements call for one or the other, your decision has been made for you.

Neither material will work as advertised if it isn’t installed correctly. That’s why it’s so important to have an experienced professional perform roofing installation or repair. Are you having a house built or thinking about re-roofing your existing home? Call Warner Roofing for a free estimate. We can give you recommendations on which underlayment is best suited for your needs.

Should roofing nails go through the sheathing? 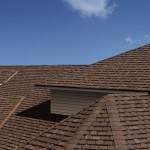